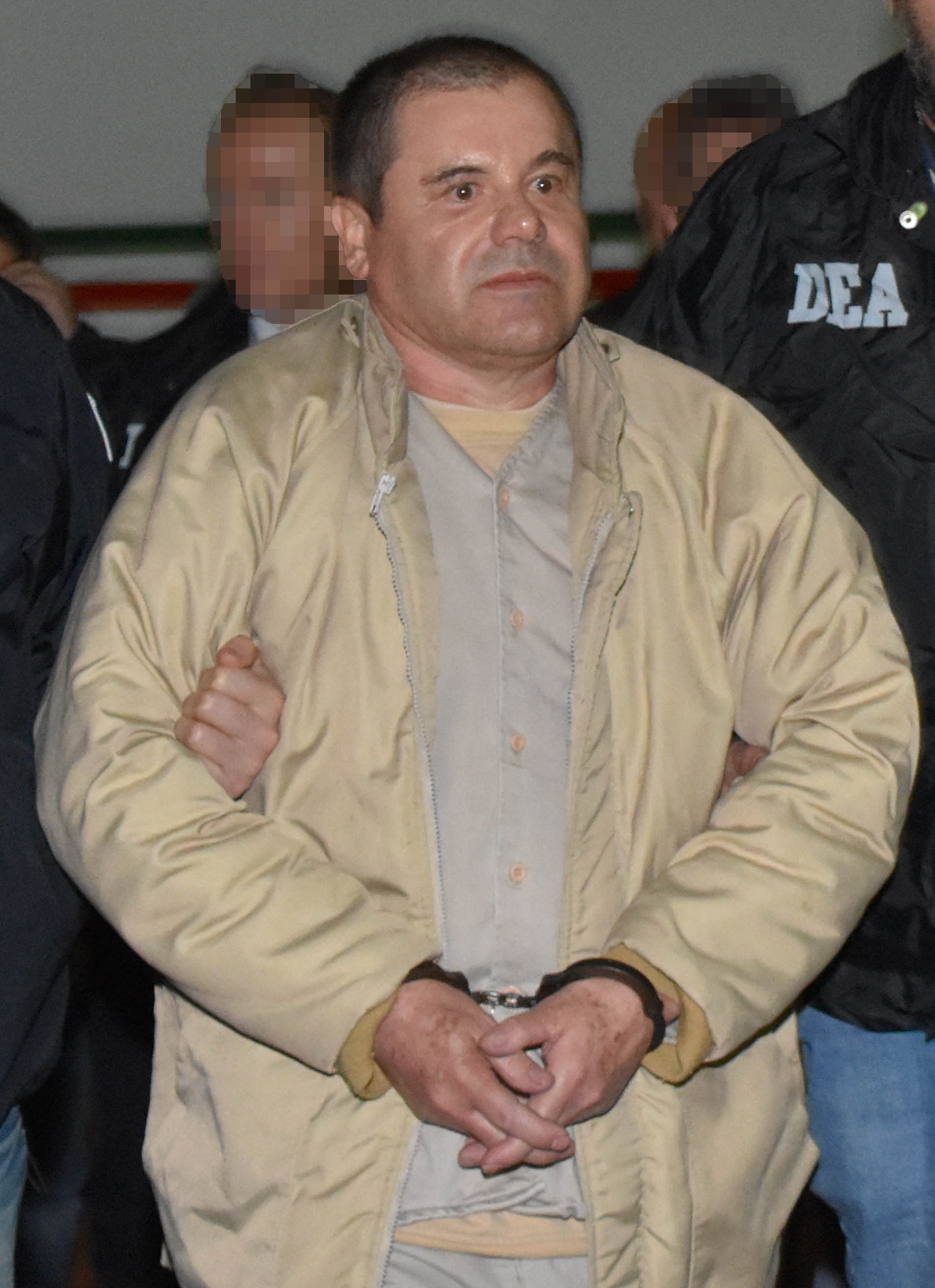 WASHINGTON – Joaquin Archivaldo Guzman Loera, known by various aliases, including “El Chapo” and “El Rapido,” was sentenced today by U.S. District Judge Brian M. Cogan to a life term of imprisonment plus 30 years to run consecutive to the life sentence for being a principal leader of a continuing criminal enterprise – the Mexican organized crime syndicate known as the Sinaloa Cartel – a charge that includes 26 drug-related violations and one murder conspiracy. The court also ordered Guzman Loera to pay $12.6 billion in forfeiture.

Guzman Loera was convicted by a federal jury on Feb. 12, 2019, following a three-month trial, of all 10 counts of the superseding indictment, including narcotics trafficking, using a firearm in furtherance of his drug crimes and participating in a money laundering conspiracy.

The evidence at trial established that Guzman Loera was a principal leader of the Sinaloa Cartel, a Mexico-based international drug trafficking organization responsible for importing and distributing more than a million kilograms of cocaine, marijuana, methamphetamine and heroin in the United States. The evidence included testimony from 14 cooperating witnesses, including Sinaloa Cartel members Rey and Vicente Zambada, Miguel Martinez, Tirso Martinez, Damaso Lopez and Alex Cifuentes; narcotics seizures totaling over 130,000 kilograms of cocaine and heroin; weapons, including AK-47s and a rocket-propelled grenade launcher; ledgers; text messages; videos; photographs and intercepted recordings that detailed the drug trafficking activity of Guzman Loera and his co-conspirators over a 25-year period from January 1989 until December 2014.

From the mid-1980s until his arrest in Mexico in 1993, Guzman Loera was a mid-level operative of the Sinaloa Cartel, earning a name for himself and the nickname “El Rapido” for how quickly he transported drugs from Mexico to the United States for the Colombian cartels. After he escaped from a Mexican prison in 2001 by hiding in a laundry cart, Guzman Loera formed an alliance with fugitive co-defendant Ismael Zambada Garcia and, together, they became the preeminent leaders of the Sinaloa Cartel. Guzman Loera enforced his will and maintained control of his drug empire through an army of lethal bodyguards and a sophisticated communications network.

The trial highlighted the methods Guzman Loera and his organization used to transport the cartel’s multi-ton shipments of narcotics into the United States, including fishing boats, submarines, carbon fiber airplanes, trains with secret compartments and transnational underground tunnels. Once the narcotics were in the United States, they were sold to wholesale distributors in New York, Miami, Atlanta, Chicago, Arizona, Los Angeles and elsewhere. Guzman Loera then used various methods to launder billions of dollars of drug proceeds, including bulk cash smuggling from the United States to Mexico, U.S.-based insurance companies, reloadable debit cards and numerous shell companies, including a juice company and a fish flour company.

Guzman Loera and his organization relied upon violence to maintain its power throughout the region and beyond. Numerous co-conspirators testified that Guzman Loera directed his hitmen to kidnap, interrogate, torture and slaughter members of rival drug organizations, at times carrying out acts of violence himself. As part of its arsenal, the Sinaloa Cartel had access to weapons, including grenades and a rocket-propelled grenade launcher. Guzman Loera’s personal arsenal included a gold plated AK-47 and three diamond-encrusted .38 caliber handguns, one emblazoned with his initials, “JGL.”

Guzman Loera and his organization also relied on a vast network of corrupt government officials and employees to protect and further the interests of the Sinaloa Cartel. They included local law enforcement officers, prison guards, high-ranking members of the armed forces and elected office holders. In exchange, the Cartel paid these individuals millions of dollars in bribes.

“The long road that brought ‘El Chapo’ Guzman Loera to a United States courtroom is lined with drugs, death, and destruction, but ends today with justice,” said Assistant Attorney General Benczkowski. “Thanks to the unflagging efforts of the Department of Justice and the law enforcement community over the past 25 years, this notorious leader of one of the largest drug trafficking organizations in the Western hemisphere, the Sinaloa Cartel, will spend the rest of his life behind bars.”

“Guzman Loera’s day of reckoning has finally come,” said EDNY U.S. Attorney Donoghue. “Never again will he pour poison into our country, or make millions as innocent lives are lost. We cannot undo the violence, misery and devastation inflicted on countless individuals and communities as result of his organization’s sale of tons of illegal drugs for more than two decades, but we can ensure that he spends every minute of every day in prison. The same fate awaits those who would take his place. I thank the brave members of law enforcement, here and abroad, for their tireless efforts that have finally secured justice in this case.”

“The life sentence imposed today is the only just result for someone who spent a lifetime spreading his poison throughout our country,” said SDFL U.S. Attorney Fajardo Orshan. “The impact of keeping former Sinaloa Cartel leader Joaquin Guzman Loera behind bars, for the rest of his life, cannot be overstated: the world will now be shielded from his brutality. Thanks to the unyielding efforts of this team, the public was finally able to see how Guzman Loera used any means necessary to control his ruthless empire, including kidnapping, corruption, torture, and murder. Our U.S. Attorney’s Offices continue to stand shoulder to shoulder with our domestic and foreign law enforcement partners to protect our citizens from the scourge of illicit drugs.”

“This sentencing shows the world that no matter how protected or powerful you are, DEA will ensure that you face justice,” said DEA Acting Administrator Dhillon. “This result would not have been possible without the dedication and determination of so many brave men and women of the DEA, who worked tirelessly to see the world’s most dangerous, prolific drug trafficker behind bars in the United States. This is a huge victory for the rule of law, for thousands of current and retired DEA agents and analysts worldwide, and for all of our law enforcement partners here, in Mexico, and across the globe.”

“Let today’s sentencing show the world that Joaquin ‘El Chapo’ Guzman has not escaped the American justice system and, now, will finally be held accountable for his many years of criminal behavior,” said NYPD Commissioner O’Neill. “I want to thank the members of the DEA, the FBI, the U.S. Marshals Service, HSI, the New York State Police and the NYPD detectives on the Drug Enforcement Task Force for their hard work on this investigation and trial.”

“With this sentencing, justice has been served,” said NYSP Superintendent Corlett. “For two decades, this individual used extreme violence, bribes, and any means necessary to bring dangerous and deadly drugs into our country and state. This sentence should serve as a reminder that no one is above the law. I applaud our partners in law enforcement for their tireless work on this case, bringing an end to the destruction this man, and this enterprise caused for decades.”

The case was investigated by the DEA, ICE HSI and the FBI, in cooperation with Mexican, Ecuadorian, Netherlands, Dominican and Colombian law enforcement authorities. Substantial assistance was provided by the U.S. Attorneys’ Offices in the Northern District of Illinois, Western District of Texas, Southern District of New York, Southern District of California, District of New Hampshire, District of Arizona and Eastern District of Virginia. The Department of Justice’s Office of International Affairs of the Criminal Division played an integral role in securing the extradition of Guzman Loera to the United States, in cooperation with authorities of the Mexican government, without which his prosecution would not have been possible. The investigative efforts in this case were coordinated with the Department of Justice Special Operations Division, comprising agents, analysts and attorneys from the Criminal Division’s Narcotic and Dangerous Drug Section; DEA New York; DEA Miami; FBI Washington Field Office; FBI New York Field Office; FBI Miami Field Office; HSI New York; HSI Nogales; Bureau of Alcohol, Tobacco, Firearms and Explosives; U.S. Marshals Service; IRS Criminal Investigation; U.S. Bureau of Prisons; NYPD and New York State Police.

This case is the result of the ongoing efforts by the Organized Crime Drug Enforcement Task Force, a partnership that brings together the combined expertise and unique abilities of federal, state and local law enforcement agencies. The principal mission of the OCDETF program is to identify, disrupt, dismantle and prosecute high level members of drug trafficking, weapons trafficking and money laundering organizations and enterprises.