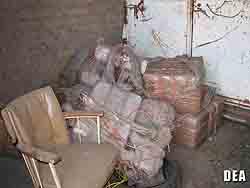 Bundles of marijuana seized during the investigation. 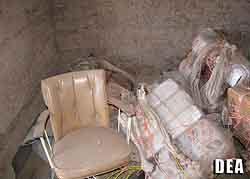 Bundles of marijuana seized during the investigation.

NOGALES, AZ. - The Drug Enforcement Administration’(DEA) Phoenix Field Division, Acting Special Agent in Charge Doug Coleman and U.S. Attorney, District of Arizona, Dennis Burke today announced that authorities have broken up a marijuana smuggling operation along the United States-Mexico border allegedly responsible for trafficking tons of illegal drugs into the country, according to a case unsealed on Thursday.

On Wednesday, agents from a multi-agency task force led by the Drug Enforcement Administration arrested eight defendants in and around Nogales as part of Operation Family Tree. The DEA and its partners also seized more than 5,000 pounds of marijuana during the course of the investigation. Three other suspects named in the federal indictment - Joaquin Vasquez-Morales, Ramiro Mercado and Carlos Ramon Gonzalez-Garcia - have warrants for their arrest and remain fugitives.

“DEA and its partners are successfully striking back at drug traffickers who use Arizona as a major hub for their criminal operations,” said DEA Acting Special Agent in Charge Doug Coleman. “This investigation identified a transportation cell that used human backpackers and horses to smuggle thousands of pounds of marijuana across the Arizona/Mexico border. The message to these organizations should be clear-use the cross border area at your own risk.”

“We are working to shut a revolving door for drugs at the U.S.-Mexico border. Taking down and dismantling large-scale trafficking operations like this demonstrates the unyielding commitment from our office and our partners at DEA, Border Patrol and other federal and local law enforcement to stop drug traffickers and secure the border,” said U.S. Attorney Dennis Burke.

The defendants in custody were charged Thursday with 13 counts, including conspiracy to possess with intent to distribute marijuana.

A conviction for these counts carries a maximum penalty of life in prison, and up to a $4 million fine. In determining an actual sentence, the assigned United States District Court Judge will consult the U.S. Sentencing Guidelines, which provide appropriate sentencing ranges. The judge, however, is not bound by those guidelines in determining a sentence.

An indictment is simply the method by which a person is charged with criminal activity and raises no inference of guilt. An individual is presumed innocent until competent evidence is presented to a jury that establishes guilt beyond a reasonable doubt.

The investigation preceding the indictment was led by the DEA. The prosecution is being handled by Michael LoGalbo and Joshua Mellor, Assistant U.S. Attorneys, District of Arizona.